No updates are better than your updates.

Updates to my site have been slow lately, so some of you have taken this as an invitation for you to send me your stupid topics to write about. Even if I suddenly had a lapse in judgement and decided that it would be a good idea to take suggestions for topics from you idiots, I think I would come to my senses as soon as I read the first few. Here's why (Note: these are all real suggestions people have sent me, right down to the grammar and spelling mistakes):

First of all, the label "African American" is the dumbest, most persistently used phrase in our vernacular. Every time you call someone an "African American," you're making at least two assumptions about the person:

1. That the person is an American. For example, if you saw this guy walking along on a street, you would probably think: 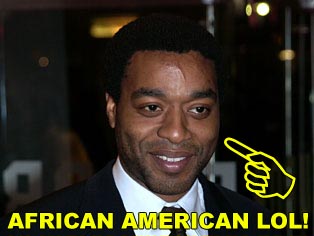 ...which is fine, except for one small detail: this man is British, which makes you a presumptuous cock.

2. That the person is African (because it's inconceivable that black people could come from Haiti, India, Trinidad, Dominican Republic, Brazil, Australia, or Jamaica). Nevermind that; BLACK PEOPLE ONLY COME FROM AFRICA.

Not to mention that every time you give a black person the distinction of being "African American" out of a mixed group, you're making an assumption about an entire country; not everyone from Africa is black. I guarantee all you politically correct morons out there have never called a white person an African American. Of course you could avoid all these problems by using the same standards on blacks as you would on whites by simply assuming that all whites are from Africa just as you do for all blacks, but that might be too forward, and in a polite society like ours, people would be all too pleased to point out which of the 192 countries you didn't guess they were actually from.

...And? What the hell am I supposed to say about snakes? Who gives a shit about them? Snakes are boring and lifeless creatures, barely showing signs of living, if you can call the slow, meandering bobbing motion of their heads from time to time "life." They just sit there all coiled up like a scaley pile of shit. The only cool thing a snake does is eat, which isn't that cool unless it's a live animal, and even then it's 1.5 seconds of action and 96 hours of digestion. Cut the foreplay and take a swallow already. You know what's cooler than watching snakes eat? Having sex.

I don't even know how to begin answer your question, and I don't want to give you a response in the traditional sense so much as I want to give you a hatchet wound on your face. You're an idiot on so many levels, that I feel almost overwhelmed. Science can learn a lot from someone this stupid.

What's really baffling is the subtle suggestion he's making in the phrasing of his question. The question "why shouldn't we be allowed to rape" implies that he has asked someone—presumably a supervisor—for permission to forcefully ravage a woman's vagina, had his request was denied (hence his knowledge that rape is disallowed), and somehow he's still able to send me stupid emails on the Internet instead of rotting in jail somewhere, learning why we shouldn't be allowed to rape through empirical observation. Idiot.

It simultaneously warms my heart and wears my delete key when I get emails from twelve-year-olds.

Already did, 8 years ago.

What about them? Don't you retards think before you click "Send" that maybe someone on the other end is actually going to read your stupid, malformed emails some day? It's almost like there's a record full of incomprehensible bullshit playing in your mind 24/7, and you put the needle down randomly and whatever it picks up, you just type it up in an email and shoot it off to me, usually mid-sentence.

Even if I wanted to, that's technically not a question without a question mark, is it dipshit?

Start a thread about annoying gay bitches... what? Listen morons, I'm sure this makes sense to you in your microcosm of an existence where everyone knows what forum on whatever website you're talking about, but for the rest of us who don't have a telekenetic link to your brain stem, do us a favor and choke.

These are the same types of people who drop names in conversations without properly introducing the new characters first, so you'll be sitting at your desk waiting for your boss to leave so you can go home early, when suddenly a co-worker will drop by and just start talking about Jack or John or Dwayne, and you're wondering who the hell still names their kid "Dwayne," and when the exact moment was that you decided your life was for sale at an hourly rate of $16.75, give or take a shitty office party every year and a box of stale donuts in the morning, only to go home to a dumpy apartment in some shit hole state that people more successful than you glance at out of their window as they pass over in a private jet on their way home to bang their hot trophy wives.

I had a lot more stupid suggestions people give me, but I'm seriously developing high blood pressure; that's not a joke, by the way. I can literally feel my heart beating in my eye lid.

29,408 stupid suggestions for articles have been sent, read, and summarily deleted.