Special orders are for special assholes
I hate picky eaters. Nothing is worse to a server short of not tipping and genocide, than a picky eater. That's exactly how I'd rate them in terms of travesties: genocide, not tipping, being a picky eater. It's like a shortcut you can take to ruin dinner. And no, that's not hyperbole, your meal will be quite literally ruined even if you're not the one being picky because of all the anxiety your choosy dinner companion has.
You can't have a normal dinner conversation with picky eaters because they're constantly wringing their hands, worried that the server may have included some ingredient that they might find slightly unpalatable. Oh no!
I think being a pain-in-the-ass when it comes to food has to do with people who are jealous of other people's allergies. Nothing needs extra consideration when it comes to meal-time like someone who has a legitimate allergy. This extra attention they receive when ordering makes some people jealous, so they concoct some special laundry-list of foods they won't eat (and it's important to note here that they can eat it, they just won't). They think that they're delicate and special and unique, so their order has to be customized to an excrutiating degree of specificity. News flash:
You're not that special.
You can eat the same food everyone else eats, you can breathe the same air everyone else breathes and you can drink the same water. You're not so unique that you have to make exceptions for every little thing you order in a restaurant. Want to know how I know that about you, the faceless reader who's reading this sentence? Because I know you're human and all humans have the same basic physiology. Yes, I know there are exceptions, but you're not one of them. If you are one of those people who has extreme dietary restrictions, we'd know because A) you'd be in an iron lung or B) you'd be announcing that you're vegan every few minutes like clockwork. Nobody cares. 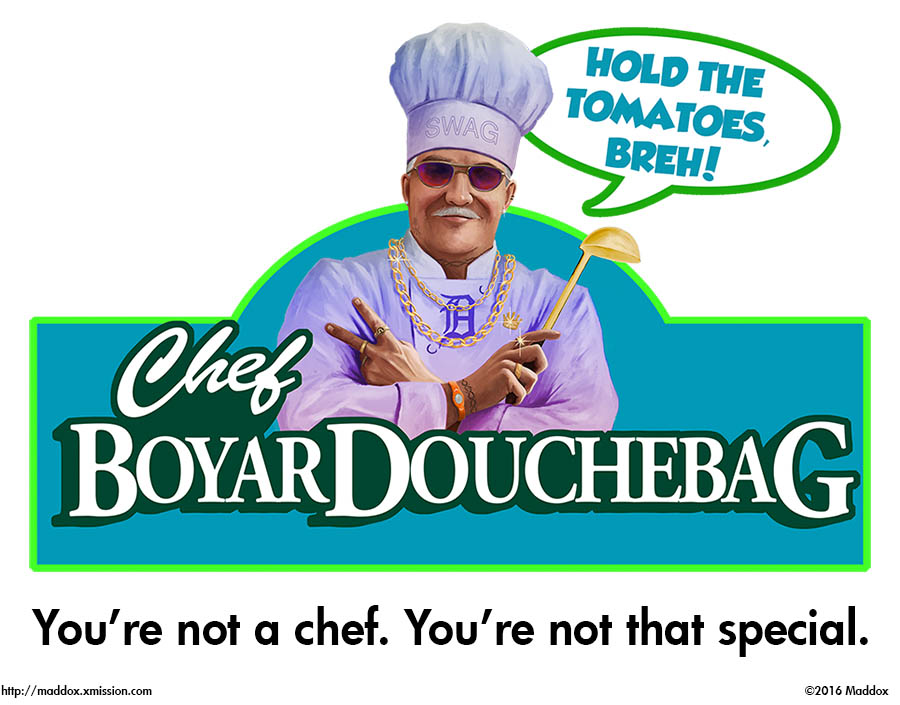 Stop being such a picky Chef BoyarDouchebag. Artwork by: Ali Hassanein
Next time you want to be a picky asshole in a restaurant and customize your order to the Nth degree, do everyone a favor and stay home. If you need attention that badly, go join a circus. That way you can have the spotlight on you at all times, and at least you won't be wasting anyone's time at a restaurant. You'll have a stadium full of people to do that to. Being in a circus is a picky eater's dream. So in conclusion, eat shit. Sources:
Tweet 260,463 picky eaters came to this website but found nothing to pick apart because it's perfect for all people of all ages.
Available now!
Join the mailing list here PS: Fuck Whales
Back to how much I rule... • New Book • Store • Email • Patreon •