If you're too much of an impressionable
idiot to watch "Sideways," then don't.

I was listening to NPR the other day because the only decent talk radio station in the ENTIRE STATE OF UTAH changed formats to sports talk. Who the hell are all these people who listen to sports talk anyway? None of it matters you morons. Nobody cares what Jim Rome thinks about some football player's salary. Choke already. So anyway, I was listening to "All Things Considered" when they were doing a piece on the wine tasting movie "Sideways:" 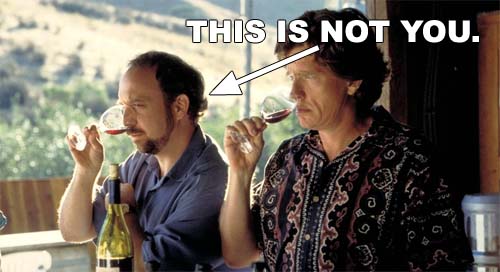 In the movie, Giamatti's character is a wine aficionado who drinks Pinot Noir in favor of Merlot, a wine that he despises. Now every idiot who has seen the movie has suddenly become a wine expert, and Pinot sales have shot through the roof. NPR interviewed a guy who said, and I quote:

You shallow idiots, get your own opinion. If you can't even go see a movie without changing your mind about what kind of wine you like, then tell you what: stay home. You'll be doing all of us a favor. Going on a wine tasting tour does not make you an expert on wine tasting. Just because you see a movie about wine doesn't mean you should stop ordering merlot with your $6 plate of pasta at Olive Garden you tools. If you liked merlot before the movie, why shouldn't you like it after?

And who the hell drinks merlot anyway? Seriously, what kind of moron would put that shit into their system? I don't need a movie to make up my mind about whether or not to drink merlot, the commercial they had a few years back was enough. It had a bunch of snobby cunts in a log cabin wearing turtle neck sweaters, as they ripped open a box of merlot and started rubbing it on themselves before they sacrificed three virgins to Kali. Man, I know that sounds like a bullshit commercial, but now that I think about it, if they really had a commercial like that, I'd drink merlot out of principle.

Then near the end of the NPR interview, they had a clip of Rex Pickett, the author of the book "Sideways," talking to fans about his book. Except instead of talking about the book, these shallow losers kept asking him about the movie. Of all the bad questions to ask him, the one question that kept coming up was "what's your favorite wine?" Oh wow, real original assholes. You ask the guy who writes a book about wine tasting what his favorite wine is? Here's an idea: READ THE BOOK.

Then, as if they expect him to say something surprising, they stand around like drooling idiots in anticipation of his answer, which is, get this: PINOT NOIR. Hey, how about that you dipshits? The guy who wrote a novel about a guy whose favorite wine is pinot noir also happens to like pinot noir! Nice question you stupid cocks. Man I hate wine tasters.

6,961 assholes went on a wine tasting tour after seeing "Sideways" because they're suggestible idiots.