Calling people your "dude"
isn't a shortcut to personality.
There's no surer sign of a vapid personality than someone who uses words and phrases like "fam, my dude" and "you do you." It's the linguistic equivalent of microwaved ramen. It's a tawdry display of cool language you haven't justified using. You haven't lived a cool enough life and don't have enough experiences to signal to people that you're cool. We know you're not. Spending your time on Twitter copying people cooler than you doesn't count as a life experience, morons. You're a loser who doesn't shower enough, owns a fedora "ironically" and got really into vaporwave for a week in 2016 after you read a Vice article. You're not a hip British DJ, a free-wheeling beach bum living out of his RV and you sure as shit aren't black or gay. Unless you are actually black and gay—which statistically, you aren't—because black and gay people are trying to reach escape velocity from the gravity of your lameness. 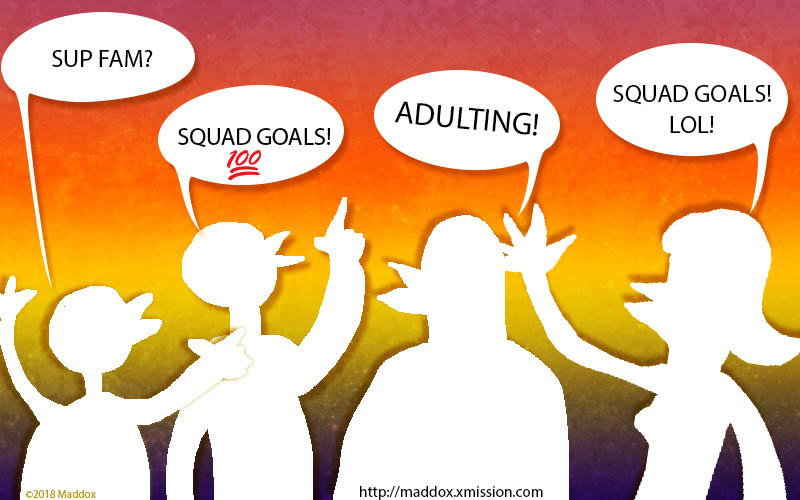 You don't have a squad and you barely have goals, nobody cares about your plans on forming a group of friends you regularly hang out with. Nothing about you is "turnt," and you aren't being hip, cool or ironic by saying you're "adulting" when you do normal, everyday shit. What's annoying about phrases like "adulting" isn't the juxtaposition of the gerund "ing" with the noun "adult," which is meant to be ironic because it's implied that an adult would know how gerunds work—it's that the person who says it thinks they're being clever. You're not. Using slang you didn't come up with isn't a substitute for having a personality. And that's the Internet in a nutshell today: a bunch of vapid morons trying to be cool by parroting phrases back and forth to each other. It's meme language, and just like people use memes as a substitute for their inability to tell a joke or make a cogent statement, people use this type of language to seem hip-adjacent. You're not hip, and you're hoping desperately that nobody notices. We know you're not clever, lit or keeping it 100. You're not "snatched" or "gucci" and your eyebrows aren't on fleek. You're Steve or Susan who lives in the midwest and doesn't like spicy food. You aren't hip enough to use shorthand like "trill," fam. Tweet 233,512 people want nothing to do with your "squad."
Available now!
Join the mailing list here PS: Fuck Whales
Back to how much I rule... • New Book • Store • Email • Patreon •