This 82-year-old-woman got her memory back by changing her diet and 19 other variables that weren't controlled for.

Recently an 82-year-old woman who suffered from dementia miraculously got her memory back after changing her diet and 19 other variables that weren't controlled for. Nevermind the fact that there is currently no cure for dementia, a woman named Sylvia recently regained her memory according to a website called "Collective Evolution." This miraculous change was a result of, and this is not a joke, the following changes she and her son made:
NONE OF THESE VARIABLES WERE CONTROLLED FOR.

If you try a number of different solutions on a problem all at once and the situation improves, you won't know which, if any, solved the problem. What's worse is that you didn't control for the possibility that the condition might have improved on its own, which, in some forms of dementia like Lewy Body Dementia,1 symptoms can appear to come and go.2 So why blueberries and walnuts? What's the scientific acumen that lead to this remarkable discovery? At this point in the article, my bullshit detector spiked harder than the value of a Bitcoin on any day that ends in "y." Apparently, walnuts are good for your brain because they're shaped like your brain. From the article:
"walnuts — these are apparently shaped like a brain to give us a sign that they are good for the brain."

The article was posted on a site called "Collective Evolution," which is a site that exists on a corner of the Internet I've dubbed "The Goofy Web." The goofy web is like the dark web, except instead of being a place for hard drugs, child porn and terrorist meetups, it's where you'll find your new agers, mystics and alternative-medicine websites. For those of you fortunate enough not to visit the goofy web, you're probably not familiar with sites like these, but for whatever reason, every now and then an article from Collective Evolution goes viral and gets millions of views seemingly out of the blue, like this one that came out in April of 2018. 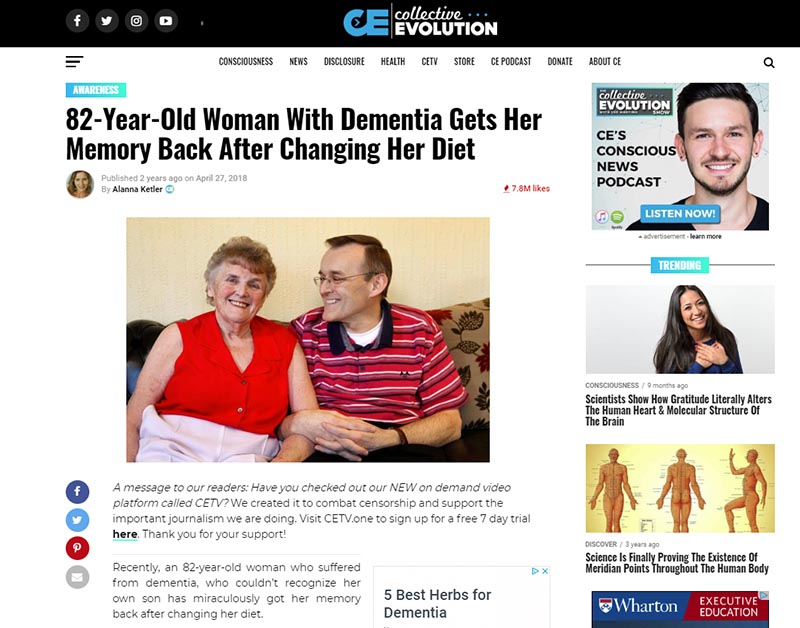 The Enquirer for new-agers.

The first thing you get by visiting Collective Evolution is an assault to your senses, with 2 pop-ups and 9 different prompts, asking you to make a minimum of 2 clicks and 4 newsletter choices: News, Disclosure, Health and Consciousness. I can only guess as to what the latter is because I assumed that the majority of visitors to this site aren't plants—though they are cognitive vegetables: 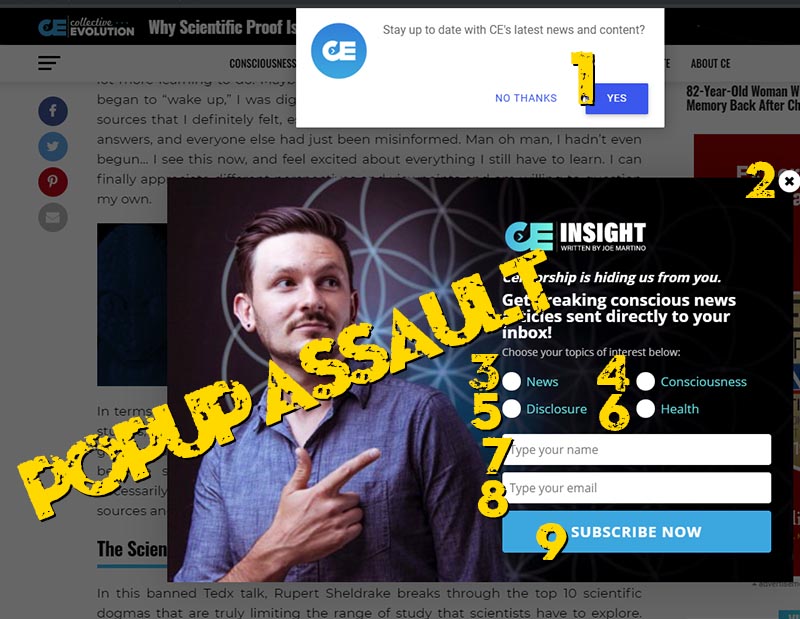 Apparently the site is collectively conditioning us to evolve the ability to automatically hunt for the "x" popups without reading them.3

Back when "fake news" was a useful term and not just a label to besmirch any news site you don't like, it referred to websites that peddled conspiracy theories, pseduo-science and unsourced claims. Sites like REALfarmacy, Natural News, Infowars and ZeroHedge, or basically any site with "truth" in the name that sells Pink Himalayan anything. These sites traffick in clickbait headlines, mysticism and pseudo-science that seems mostly harmless at first, until you realize the heavy-handed anti-vaxxer message they're pushing: 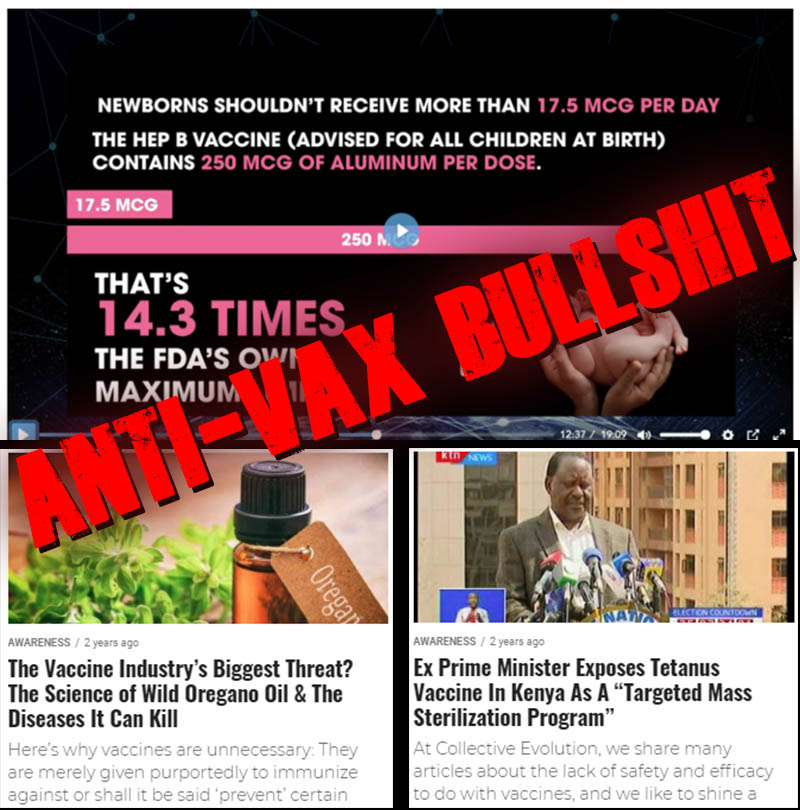 Some of these headlines seem so plausible, even I, a megamind who knows everything, still checked to see if the headline above was true. Was there really a "targeted mass sterilization program" in Kenya? No, of course not! According to Snopes,4 Kenya doesn't even have any laboratories capable of testing the vaccine for sterilization additives. There are false rumors and conspiracy theories like this trotted about every few years for various countries and we are all dumber for having read them. Compared to mass-sterilization conspiracy theories, the "eat what looks like what ails you" theory seems relatively innocuous, until you realize people forego real medical treatment for unproven dietary alternatives. This theory is steeped in ancient Chinese bullshit (Zang-Fu theory where people from antiquity think your body is made up of 5 substances, one of which is "essence"5). These weren't practices in medicine so much as stabs in the dark by people from a less refined epoch who ate food that symbolized body parts in hopes of improving the function of said part. For example, goofy shit like this: 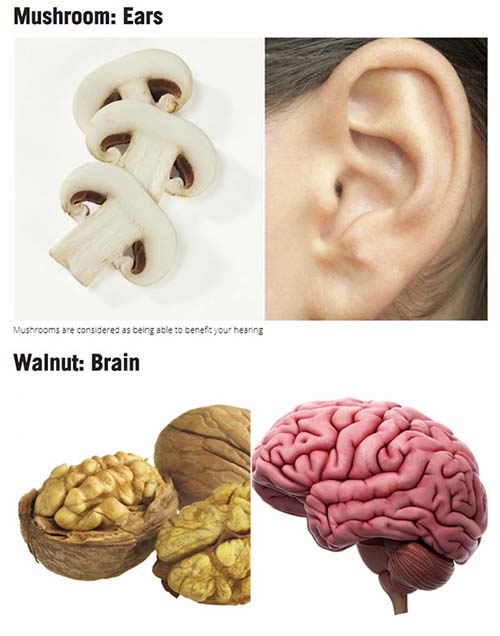 This was published on a website called healthista.com,6 but this nonsense has spread to far more mainstream sites like Womansday.com7

By that logic, guys who put lifts on their pickups should be double-fisting zucchini, eggplant and other phallic fruits & vegetables down their throats in a desperate bid to compensate for their chubby nubs. But here's where this article gets nefarious, and probably why it was viewed so many times (about 7.8 million as of this writing). The article states:
A change in diet, which was comprised of high amounts of blueberries and walnuts, has proven to have had a strong impact on Sylvia's condition that her recipes are now being shared by the Alzheimer's Society.

That's quite a lofty claim! Of course, no link to any sources were included, so I did some digging and sure enough, this article does appear on the UK Alzheimer's Society website,8 though only as an anecdotal account. In fact, the conclusion of the article specifically states that "there is no strong evidence that these steps will slow or stop the underlying diseases that cause dementia:"9 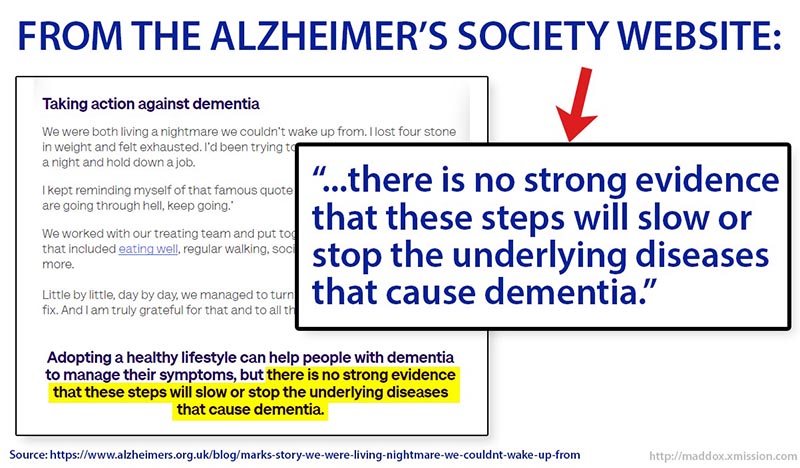 Surprise! There's still no cure for dementia, despite the lofty claims, hype and false hope.

In fact, these claims seem so misleading that when someone asked a question on the website's comments section, asking "how much blueberry [sic] and walnuts" should be consumed to see these benefits—a very reasonable question—and the Alzheimer's Society responded and said:
"we cannot in good conscience recommend particular recipes or foods as a cure for dementia without sound scientific evidence:" 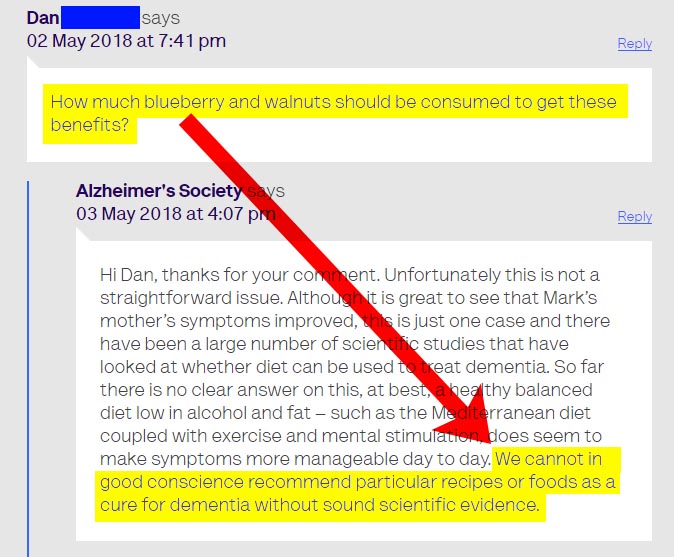 Newsflash: if diet remedies cured anything, the caregivers who have to witness patients suffering every day—including their own family members—would probably have publicized the cure by now, even if the cure wasn't profitable because not every caregiver would share in the profit in the first place, making the conspiracy motive moot.


So not only are sites like these shitty for giving people false hope, but they're dangerous by trotting out false "cures" to people who might forego actual medicine in favor of folksy, Farmer's Almanac bullshit. Just because it's natural, doesn't mean it's good for you, dipshits. 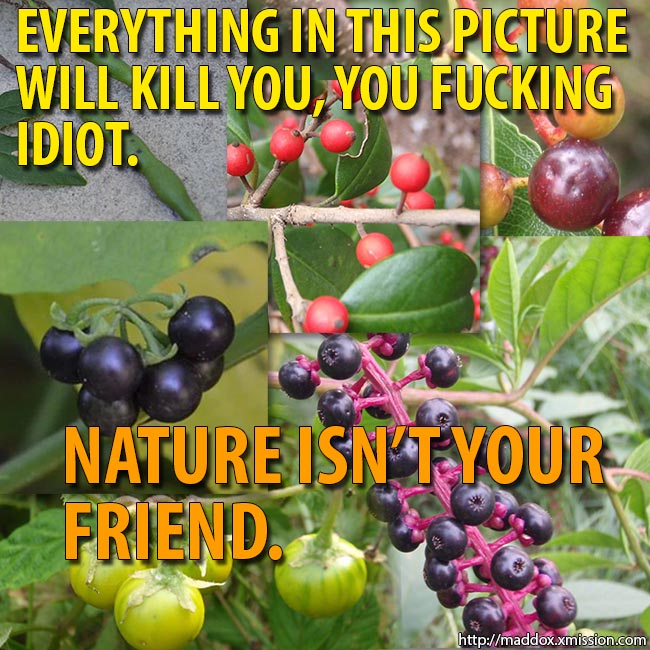 Here's a bunch of fruit and vegetables found in nature that are highly toxic. Eat up, dipshits!

We need safety from nature, nature doesn't need safety from us. Nature is indifferent to your beliefs. Things that come from nature aren't necessarily good for you or better than medicine and food made with deliberation. While processed foods often have garbage additives, nature has a pretty shitty track record too. Most of the fruits, vegetables and plants found in nature are poisonous. All the varieties of foods we eat comprise of a small percentage of the plants found in nature because NATURE DOESN'T GIVE A SHIT ABOUT YOU. Nature is a place where giant bolts of lightning literally fall from the sky and strike people and animals indiscriminately. Nature is something we should view with contempt and wariness. It's a thing for us to conquer, not cede to. After all, just because you eat "natural" foods doesn't mean it's produced naturally, hippy. There's nothing natural about how our foods are produced, organic or otherwise. Nature doesn't create food for us in giant, symmetrical rows of cabbage that go on as far as the eye can see convenient for us to harvest. Nature gives us rocks and moldy chaos. We discovered which plants you can consume through trial and error, then we cultivated its seeds, learned how to plant it and learned which seasons to harvest it. People and animals died to produce your meal, vegetarian or not. Unless you think farm threshers can discriminate between stocks of wheat and families of mice, in which case you're a moron. Sites like Collective Evolution promote nature-worship and encourage this moronic thinking by sowing the seeds of doubt in the fertile mind of gullible idiots. And if you want evidence—and you should—just take a look around the site to see what else was written by Alanna Ketler, the author of the dementia piece. Nonsense like, "7 things you probably didn't know about the lost city of Atlantis, People with RH-Negative blood don't come from Earth" and "Messages from our animal totems:" 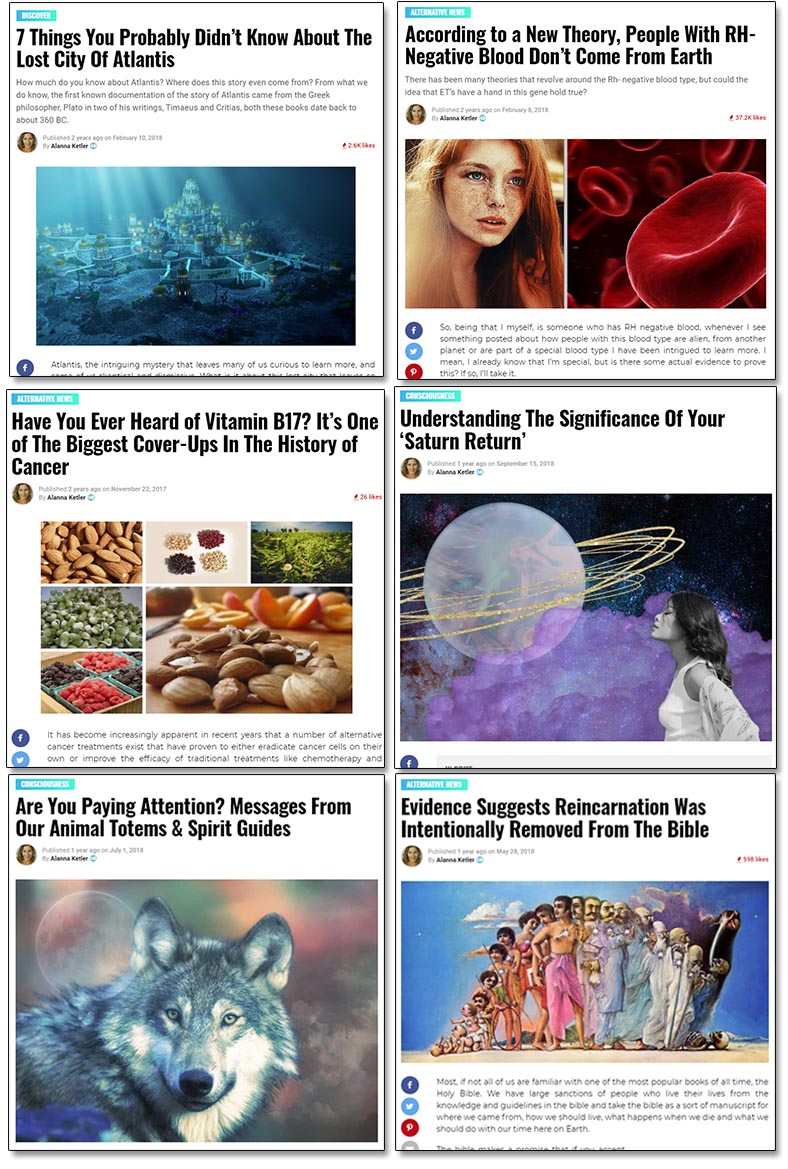 
And here's my personal favorite, "Why scientific proof is a myth:" 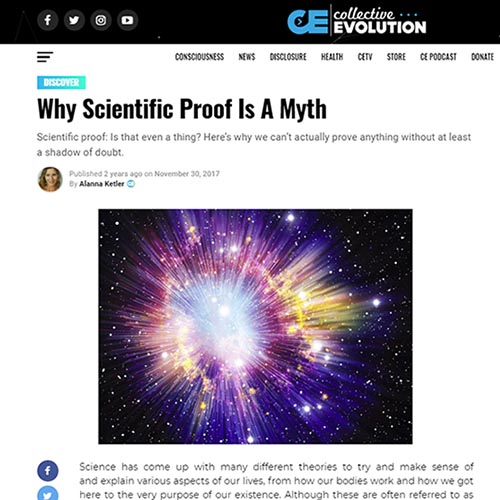 So you might be wondering by now, what's in it for Collective Evolution? Why are they peddling so much clickbait bullshit? For the same reason most people write clickbait: MONEY. In fact, they implore their readers to "follow the money" in their "scientific proof is a myth" article, as a possible motive for why scientists might falsify their research. Yet they have the audacity to run ads on the site, profiting off their bullshit mystic pseudoscience, bogus claims and false hopes of their readers: 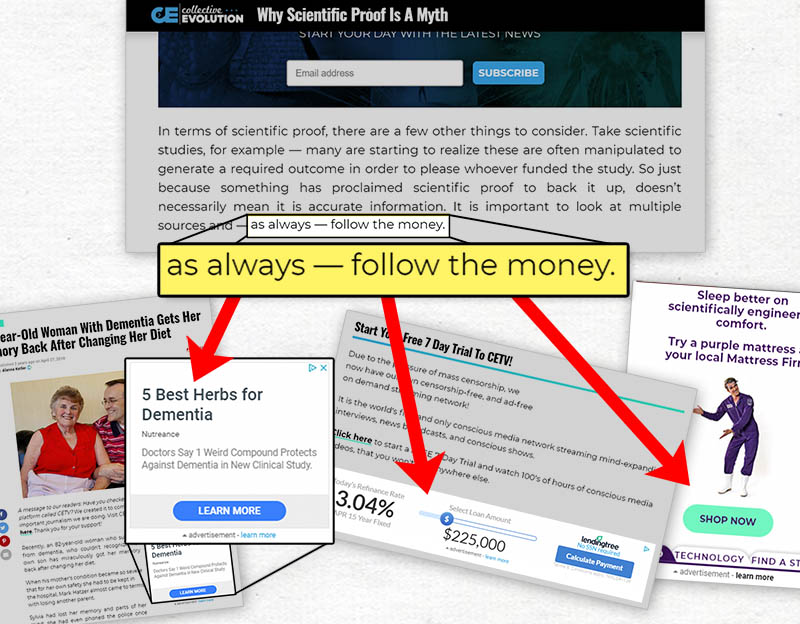 Wow, if you follow the money, it turns out Collective-Evolution's motives aren't as "natural" as the supposed remedies they're hawking.

So if you were wondering why sites like this promote "natural" cures so much, it's because THEY PROFIT BY PROMOTING THESE "NATURAL REMEDIES." So that article giving people false hope for a cure for dementia actually runs ads on it selling "herbs for dementia." It's tantamount to writing a review about a brand of snake oil without disclosing that you also happen to have a financial stake in selling snake oil. And that snake oil doesn't cure anything. I'm torn over whether or not these sites are unethical because on one hand, they prey on old people who should be launched into the sun, but on the other hand, they're profiting by promoting hippy bullshit. You know what? Nevermind. Send this to your grandparents. Feed them blueberries and walnuts to cure their dementia all you want. They won't remember why they were eating it in the first place. Take your medicine and shut up. No, it probably won't always cure everything, but people have been eating these natural foods for years and that shit hasn't worked. Try medicine first, and if that doesn't work, try whatever other voodoo horse shit you want. But only after you've tried actual medicine. If the ancients with their "natural" diets and remedies were so smart, how come none of them are still around? Oh that's right, because they were stupid rock-worshiping idiots who weren't smart enough to turn into an agrarian society and know not to breed with family members. There isn't a conspiracy to keep your not-so-secret diet of blueberries hidden. The fact that pharmaceutical companies are in it for profit should tell you that the foods you eat aren't secret cures to anything. If the food you eat could be exploited to cure a disease, you can bet that pharmaceutical companies would create a modified & patented version of the chemical component, just like they did by slightly modifying the chemical structure of meth to produce adderall.9 Not that any of this matters because anyone who believes in this mystic bullshit has long-since tuned out and never made it this far in the article anyway. If you enjoyed this article, and I don't know why you wouldn't because I'm a brilliant writer, here's a video I made about alternate news sites that touches on this subject:
You're welcome.
Sources:
Share
Tweet

101,692 people didn't make it this far in the article and will probably forego medicine for food shaped like what ails them. By that logic, chili must be great for diarrhea.