Bob Dylan was the original podcaster.


Bob Dylan isn't a singer, if you consider singing the act of expelling air that harmonizes with music—and I do. Instead, Dylan talks, and sometimes music plays. If I wanted music + talking, I'd go to a coffee shop where music was playing while people talked. Except even then, any coffee shop that had Dylan in the corner, rambling non-sequiturs and disjointed thoughts would be a coffee shop I wouldn't solicit. Who hates Bob Dylan songs? Secretly, everyone. Yet nobody is brave enough to admit it because Dylan is weird and rambly, and people feel like it's something they should like. It's a Schrodinger's fan of sorts: a Dylan fan doesn't exist unless a Dylan fan is observed. Once one idiot pipes up at a party, then come the pretenders, all pretending to enjoy his sermons. Just listen to this clip of his 17-minute "song" that he recently released titled "Murder Most Foul." The lyrics are: "Wolfman, oh Wolfman, oh Wolfman howl / Rub-a-dub-dub it's murder most foul:"
Artists like Bob Dylan, Leonard Cohen or Tom Waits confuse people because we're told it's music, so we think we're supposed to act the way people act when they hear music: by nodding thoughtfully and agreeing that what we are hearing, is in fact, music. But instead what we hear is Cohen or Dylan telling a yarn for several minutes, plus a dusting of instruments. It's basically a podcast. Leonard Cohen is one of the worst offenders. Listen to this babbling mumbler:
The instruments might as well not exist. It's not quite minimalist enough because you can still hear it, but it's not coherent enough for it to be anything you'd want to ever voluntarily listen to ever. It's like a handful of jazz musicians and a handful of classical musicians were having a warmup session in the same room and someone just hit record. And then Leonard Cohen just starts talking until he's done, I guess. The first time people hear artists like Cohen or Dylan, they feel confused but they don't want to act like they don't understand or aren't sophisticated enough to appreciate the sound of an old man talking. The average Tom Waits song sounds like he's trying to clear his throat for 6 minutes. It's like that raspiness you can hear when someone has some phlegm but they're trying not to be rude and cough or swallow it, but you just wish they would so you can move on instead of pretending like it isn't happening. Listen to this Cookie Monster bullshit:
The reason people pretend like they like Dylan is because they're afraid of being outed as "uncultured" by folksy-music bullies—the worst kind of bullies. These bullies get irrationally angry when they suspect someone is anything less than an enthusiastic fan of their inoffensive, milquetoast "music." Dylan songs aren't so much about melody or music so much as they are about carrying on the oral traditions of sharing shitty poetry with as many people as possible. The reason folk-music bullies get so angry at the prospect of someone not liking their mumbly bullshit is because we live in an era where everyone is outraged about everything all the time. The spectre of liking something "safe," inoffensive and milquetoast gives solace to people who are terrified of endorsing a cultural or political firebrand. The fact that Leonard Cohen died without any major controversies makes him the perfect candidate for the meek to like forever. The safest artist to like is a dead one who lived a boring life. And that seems to be this genre in a nutshell: inoffensive. Rambly. Boring. Call it what you want, but it's not music. It's an old man yammering on about something for a few minutes. Bob Dylan was the world's first podcaster, and we didn't even know it. As a musician, Dylan isn't one. But as a podcaster, he may be decent. And it's in that spirit, I've created a petition to change Bob Dylan's category on iTunes to Podcast: 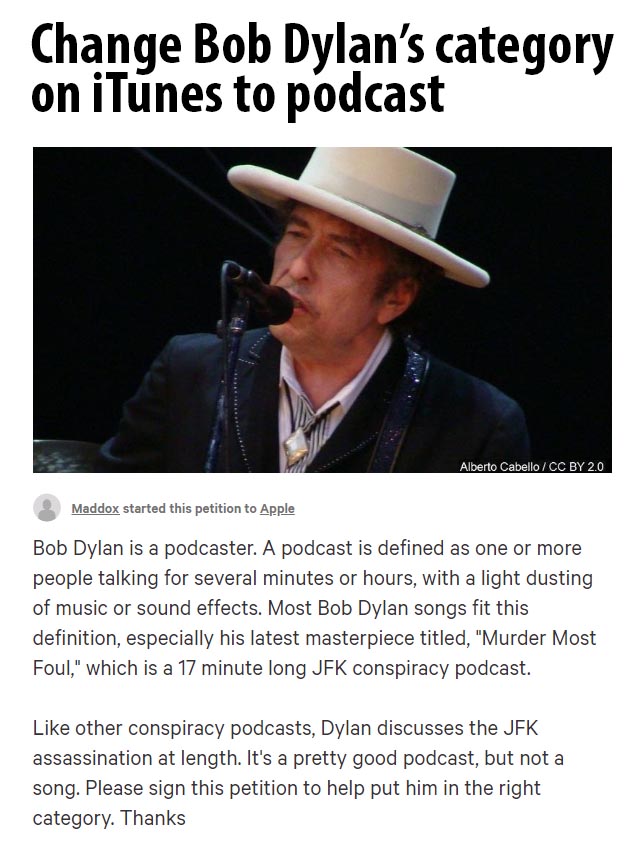 111,441 people think Bob Dylan is an okay singer / songwriter, but a great podcaster.