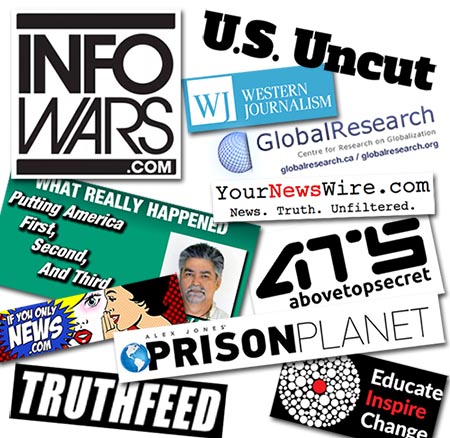 Look at this bullshit.

Except what you get instead is some poorly-written, unresearched opinions, debunked conspiracy theories and a bunch of pseudo-scientific articles with "one weird trick" to cure something gross like mouth rot. Want a scoop? Any time you read a website that advertises a product for people missing teeth, that means they're advertising to you. Now I know what you're thinking, "but Maddox, I have all my teeth!" You won't for long. People who read alternate news sites will eventually lose their teeth. It's an Anankean inevitability; you're going to do something stupid like put a firecracker in your mouth because you are stupid. Want to know how I know? Because you read bullshit instead of news, and you not only think you're informed, but that you're smarter than the general populace because you're doing your own independent research from an independent news source. Except you're not. You're an idiot who's going to lose all his teeth. These sites are using you for money:
Any time I see one of these bullshit articles, I quickly scan the URL for words like, "truth, planet, evolution, natural" or anything that sounds like it might be a website that sells you pink Himalayan anything. If it's not from a trusted, or "main stream" news source, I become more skeptical, not less. For example, here's that article I referenced in the video from WorldTruth.tv: 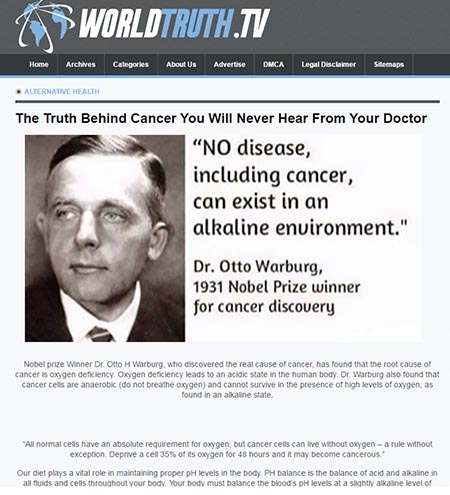 The article is scarce on sources, but one of the only legitimate studies they link to clearly states that, "there is no scientific literature establishing the benefit of an alkaline diet for the prevention of cancer at this time2." As with most websites and people trying to con you, if you want to know "the truth," all you need to do is follow the money. If a website is touting the benefits of a certain supplement that they also happen to be conveniently selling, guess what, idiot? The article was written to sell you a product. You're reading an ad. Speaking of ads, InfoWars is one of the worst offenders. They pretend to be the arbiters of some supposed truth, while Alex Jones bloviates every week about some supposed government takeover that he keeps promising will happen year after year. They're coming for your: guns, property, liberty. They're always coming, but never here. UPDATE (10/14/16): The screenshot of the Infowars website has changed since I created this video, but you can still see the item in the store on Archive.org, including the 1600+ reviews giving it 4.5: 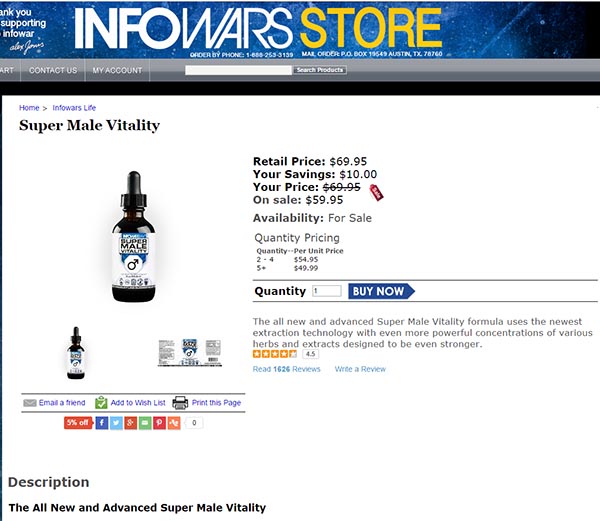 Drink this for a boner3

When it comes to food, any time I see the words "ancient, wisdom" or "legend" on the package, I spike that shit into a land fill. Speaking of, here's an excerpt from the InfoWars "super male vitality" product:

"Super Male Vitality is the result of ancient wisdom reinterpreted over several years in the light of modern equipment and analysis.

Reinterpreted over several years? What the hell does that even mean? When you interpret something, you make sense of it. When you reinterpret something, that means someone already made sense of it (supposedly the "ancients"), and now you're making more sense of it? Why? I thought the ancients were wise? And if we're relying on ancient wisdom, why is the use of "modern equipment and analysis" a selling point? I thought the ancients knew their shit? Ancient wisdom is garbage. The "ancients" drank mercury and didn't know the function of our brains. These are a people who had a life-expectancy of 30 years, had no cars, no Internet and no floss. Most of them were missing teeth... and if they were around today, they'd probably listen to Infowars. Sounds like a civilization made entirely of morons. Stop buying into this bullshit. You're getting played. If it's not a "main stream" news source, that means they don't have anyone to answer to and nobody will lose their job if they report inaccurate information. You're not "woke" for reading alternate news, you're a dipshit. Rather than poring over old news clips to prove that 9/11, Sandy Hook, or the Boston Marathon was an "inside job," you should go outside and get a job. Sources:
Tweet 366,152 of your friends are annoyed every time you post a link to an alternate "news" site.
Available now!
Join the mailing list here PS: Fuck Whales
Back to how much I rule... • New Book • Store • Email • Patreon •